Visit gofundme
1000 Grandmothers for Future Generations is organizing a fundraiser to assist with critical needs of these Water Protectors in Minnesota organizing to Stop Line 3.  We are working with trusted Indigenous nonprofit Honor the Earth with Grandmother Winona La Duke, Executive Director and Great Grandmother Mary Lyons, esteemed elder and author. Native Grandmothers on the ground know the needs and have the confidence of the Water Protectors to use their wisdom to make good decisions about allocating funds. Funds may be used for warm sleeping bags, shelter, bail and legal fees and more. 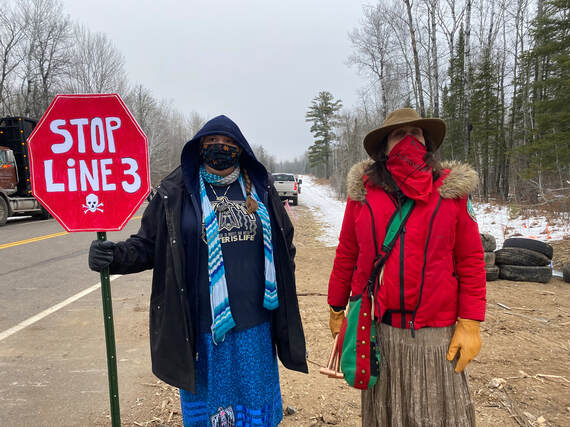 Photos above by Keri Pickett
What is Line 3?
Ojibwe tribes have been leading the fight along with community and environmental groups to stop Line 3 in northern MN for 6 years. This very last section of pipeline would bring toxic tar sands from Alberta, Canada to Superior, WI to flow through a maze of pipelines to Louisiana. Then into tankers to feed the dwindling global need for filthy dangerous tar sands crude. Line 3, if completed, would emit toxic pollutants equivalent to 50 coal plants a day. All at a time when the demand for oil is plummeting.

The permit to begin drilling has been issued to Enbridge Energy giant. Despite the pretense of being a “replacement project” in reality a whole new Line 3 carrying twice as much tar sands would be built along a new route that crosses 200 bodies of water including the Mississippi twice, cuts across the heart of Ojibwe territory of lakes and wild rice watersheds, violating indigenous treaty rights and sovereignty and threatening their culture and way of life. And the old corroded pipeline may be left to rot and leak.

After exhausting all the means at their disposal, the tribes now have water protectors building camps along the proposed 300 mile route to protect their water and stop new construction. The future of the water, the land and their tribes existence is depending on them. We can help. 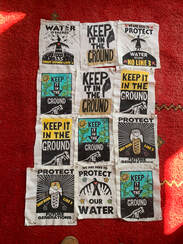 
Photos of some of the Line 3 actions we have been involved with: