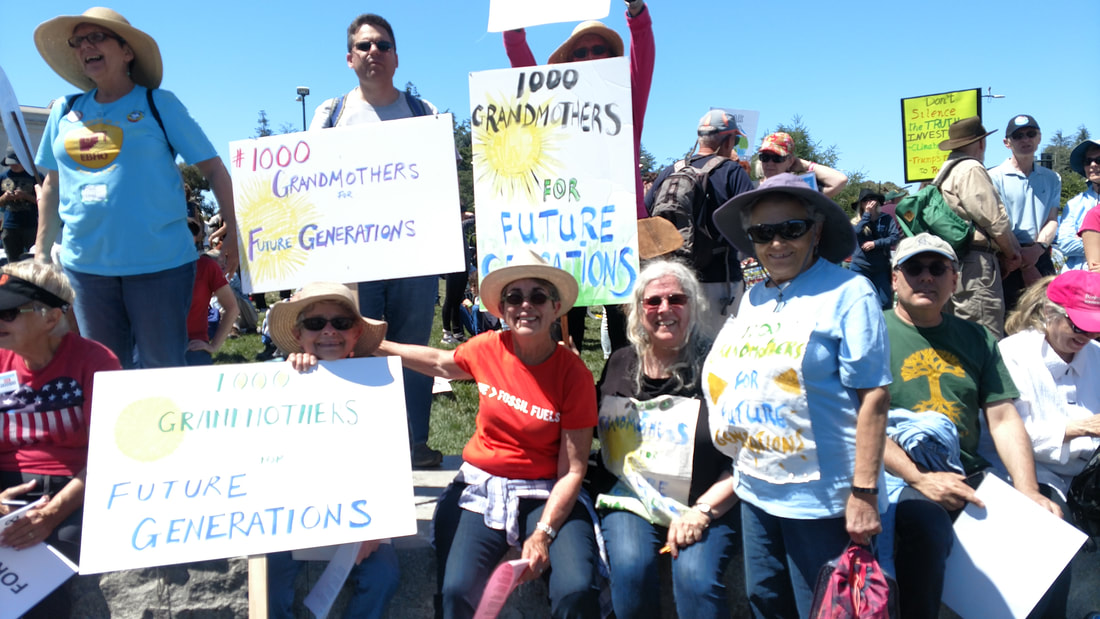 History of the 1000 Grandmothers

In October 2016, moved by the courage and wisdom of the Grandmothers at Standing Rock, a half dozen elder women from Oakland and Berkeley, CA started meeting In October 2016.  Our first work together was supporting the Grandmothers at Standing Rock, - who, as water protectors, stood up against the fossil fuel industry’s Dakota Access Pipeline .  Subsequently, guided by our core group’s belief that grandmothers have a deep heart connection to future generations and could be a powerful voice in the Climate Movement, we began organizing elder women locally about the Climate crisis.

Acting on our belief that given a platform to step into the Climate Movement many would join in and co-create a piece of the Climate justice movement, we began to grow our Grandmothers’ network. A growing number of us began to ‘show up in the streets’ to do non-violent direct actions to support the leadership of indigenous and youth climate groups.  We had large contingents in two international days of climate action/strikes.  We participated in a sister-Grandmothers project with Lakota Grandmothers from South Dakota. We created a very active email and Face Book page. (Aware that many of our Grandmothers do not use Facebook, launching this website has been a goal for awhile).

By the middle of 2019 the number of Grandmothers who had joined our list (as well as those who joined us in actions) was in the hundreds, and we called for our first ‘gathering’ of grandmothers to build our network in new ways.   We developed work groups (see web-site), and have been engaging in multiple ways of organizing about the climate crisis.  By Sept. 2019 our numbers reached over 1000.  In 2020, much of our work had to shift due to the pandemic, and our being a particularly vulnerable population.  But we continued to do some socially distant actions, including holding the streets for demonstrations, joining in street painting and other art projects, and, many of our members were deeply engaged in electoral work through letter, postcard writing, and phone calling .  2021 began with a bang,  with a wonderful benefit concert that raised $194,000 for the Warnock and Ossoff, campaigns as well as Stacey Abrams organization, Fair Fight.  You can still see most of that concert on our website.

​We also began a partnership with Grandmothers on the ground, fighting the Line 3 Pipeline, raising funds, and participating in other actions to support these Water Protectors.